The learners are sitting in according to two randomly allocated groups. The atmosphere is filled with excited apprehension. Two people have been given the task of opening the debate and making sure everybody who wants to talk gets their turn. Everybody has been researching the chosen topic at home, using videos and interactive texts provided by the trainer, as well as doing searches on their own. Now it’s time to share the arguments that the two groups have prepared, and after a short introduction by the moderators, the others start presenting their case, more and more hands in the air eager to join in.

The description over illustrates how debates can be an efficient and powerful learning activity in a Flipped Classroom or general in Flipped Learning. In line with the pedagogical framework of Flipped learning, the learners can use their individual space to do research and to prepare themselves for the debate while the group space becomes a learner-centered, active environment, in which the trainer’s role is more of a facilitator or even spectator. While the preparation time is important for remembering and understanding, the debate itself is particularly suited for developing the higher Bloom’s elements (apply, analyse, evaluate, create). The debate can also be supplemented by a common evaluation afterward, in which learners can speak freely about their experiences. 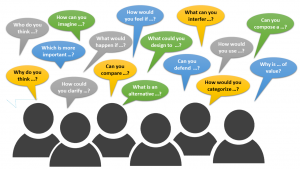 What does “debate” mean?

The debate can be defined as “a way of arriving at a reasoned judgment on a proposition” (Freeley AJ, Steinberg DL, 2014) and is usually performed with two or more people having or taking on different perspectives on a specific topic. It is widely recognized that debating is an important tool to develop competences such as critical thinking, perspective-taking, verbal skills, and listening. But debating is also much more as it is creating the foundation of modern democracy and political decision-making, from state-level and international affairs to local councils in tiny villages.

Although occupations vary in the demand they put for debating skills, it can be argued that debating is a key component to active citizenship.  In this video, you can learn more about the importance of putting one’s ethical values on the table to reach deeper levels of debating as a democratic tool. It also contains some interesting real-world dilemmas and cases which can be used in a classroom debate activity. Enjoy!